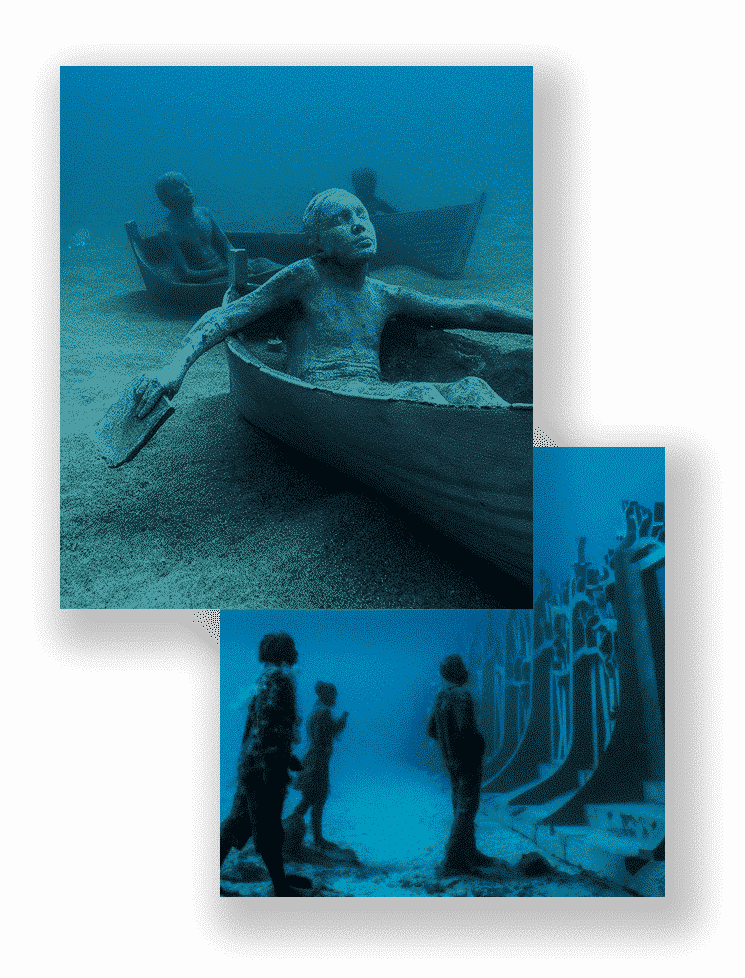 Something that you have never lived before, a Museum under the sea, which tells us about Lanzarote, its people and its traditions, shows us its flora and fauna in a totally different framework. It is a unique work created by Jason de Cayres Taylor, diver, biologist and British artist of recognized international prestige.

The Atlantic Museum is located about 14 meters deep in the clear waters near the south coast of Lanzarote, in the Bay of Las Coloradas, covering an area of ​​2,500 square meters. The museum project forms a large artificial reef and consists of a series of sculptures made of neutral pH concrete that, over time, will serve to increase marine biomass and facilitate the reproduction of island species.

What will we see in the Museum?

Art, which always plays with fantastic contradictions, moves the desert fauna to the bottom of the sea and immerses a few locals who will remain underwater for the next 150 years. In his function of social criticism, it tells us of self-centeredness or cult of self-image, of excess technology to the detriment of human ties, of the drama of refugees or of lost traditions.

Specifically, it is made up of a series of life-size sculptures located in different scenarios; The central part consists of a botanical garden that shows the rich variety of the flora of the Island of Lanzarote.

Los Jolateros: A group of children in their boats made out of brass that refers to a tradition of Lanzarote.

Immortal: Molded from a local fisherman from the island of La Graciosa, on the north coast of Lanzarote, the sculpture consists of a series of concrete sticks that represent a traditional funeral pyre.

Lampedusa Raft: A boat with immigrants. Reflection on the humanitarian crisis based on Gericáult’s painting.

Offline: A couple taking a “selfie” with their faces cut.

Crossing the Rubicon: Grouping of 35 human figures of people living on the island. They walk towards a wall and a door under the sea, which represents a boundary between two realities and a portal to the Atlantic Ocean.

Hybrid garden: Fuse nature and humanity living together in harmony while referencing the rich vegetation of Lanzarote.

Portal: The portal represents a young hybrid girl looking towards a large quadrangular mirror that reflects the surface of the ocean in motion.

Deregulated: It consists of a playground where businessmen play. A swing and two rockers try to show the indifference and arrogance of the corporate world towards the natural world.

Tubular hybrids: These sculptures are half human, half cactus.

The Photographers: Two figures of identical photographers taking a picture.

Human turn: Set of around 200 figurative works in real size that create a great circular formation.

Graciosa Marine Reserve: full day from 7:15 am (end depending on season)

All our diving packages include:

These are the possible extra services you can add to your package:

Ask for info or book

You can learn more about which cookies we use or deactivate them in settings.

This website uses cookies so that we can provide you with the best user experience possible. Cookie information is stored in your browser and performs functions such as recognising you when you return to our website and helping our team to understand which sections of the website you find most interesting and useful.

Strictly Necessary Cookie should be enabled at all times so that we can save your preferences for cookie settings.

If you disable this cookie, we will not be able to save your preferences. This means that every time you visit this website you will need to enable or disable cookies again.

This website uses Google Analytics to collect anonymous information such as the number of visitors to the site, and the most popular pages.

Please enable Strictly Necessary Cookies first so that we can save your preferences!